Rotating disc plants were the first sewage treatment plants to really enter the small domestic UK market in the 1970's. They revolutionised domestic sewage treatment by enabling discharges to watercourses, but have largely been replaced by new, simpler and more efficient technology.

Disc type plants are 'Rotating Biological Contactors or RBC's. They give a passable quality of effluent when maintained and used correctly, however, some did not perform well in their EN12566-3 testing

There are a lot of things to malfunction. Please click here for servicing, spare parts and repair costs for a 6 person system.

How a bio-disc RBC Works

RBC's are three stage sewage treatment plants.  The discs themselves treat the sewage effluent after it has passed through a Primary Settlement Tank. The primary settlement tank settles the solids which form a sludge in the bottom of the tank. The bio-disc process involves allowing the wastewater to come in contact with bacteria which grow on the biodiscs and digest the pollutants in the wastewater before discharge of the treated wastewater to the environment, usually a ditch or stream. A disc or Rotating Biological Contactor (RBC) sewage treatment plant can be all three stages housed in one tank or separate stages in different tanks, depending on the size of the plant.  It consists of a series of closely spaced, parallel discs mounted on a motor-driven rotating shaft which is supported just above the surface of the waste water. The rotation is achieved via a motor gearbox and bearings on either end of the biodisc shaft and is constant, 24 hours per day.

Micro-organisms grow on the surface of the discs where bacterial digestion of the sewage pollutants takes place.

The rotating packs of discs (known as the media) are contained in a tank or trough. Commonly used plastics for the disc media are polyethylene, PVC and other plastics. The shaft is aligned with the flow of wastewater so that the discs rotate at right angles to the flow with several packs usually combined to make up a treatment train. About 40% of the disc area is immersed in the wastewater and RBC plants usually protrude out of the ground.

Biofilms, which are biological growths of biomass that become attached to the bio-discs, digest the organic materials in the wastewater. Aeration is provided by the rotating action, which exposes the biodiscs to the air after contact with the wastewater. The biomass on the discs 'breathes and eats' as it rotates.  The degree of wastewater treatment is related to the amount of media surface area and the quality and volume of the inflowing wastewater. 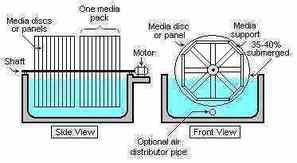 The treated effluent then flows to a final settlement tank where dead bacteria and small particles settle to the bottom.  The cleaned effluent then discharges through the outlet.

It is ESSENTIAL that the water level in RBC plants NEVER rises up to the level of the belt/chains or motor.  This can happen if groundwater levels or ditch water levels rise during wet weather and flow into the unit from the outlet pipe.  The belts can transfer the water to the motor and blow it.  Once the discs have stopped turning for any amount of time, it can be very difficult to start them again without breakage, due to the sludge build-up at the bottom of the discs.  A new disc pack is expensive, so look after it.  If in doubt about your water levels in wet weather, FIT A PUMPING STATION with a non-return valve or syphon after the RBC unit