Drainage Ditches for the discharge of Sewage Treatment Plant Effluent

What Is A Drainage Ditch?

A drainage ditch is a narrow channel dug at the side of a road or field, to carry away water. The water drains from the land or the road into the ditch, often via land drainage pipes that are 2 to 3 feet below ground in the field. These drains empty into the ditch, which then connects to a larger ditch, stream or river and eventually to the sea.

You cannot dig your own drainage ditch unless it is connected to the sea. Such a 'ditch' is simply a 'moat' and will not drain anything away, including sewage treatment plant effluent.

The Hedge and Ditch Boundary Presumption

The legal boundary presumption is outlined in this classic statement:

The rule about ditching is this.

"No man, making a ditch, can cut into his neighbour’s soil, but usually he cuts it to the very extremity of his own land: he is of course bound to throw the soil which he digs out, upon his own land; and often, if he likes it, he plants a hedge on top of it.” Vowles v Miller (1810)). 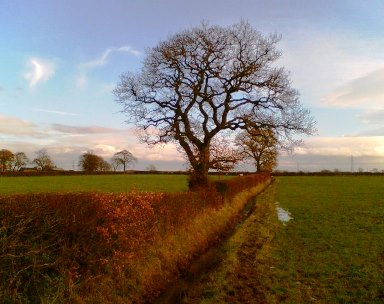 presumed to be on the opposite edge of the ditch from the hedge. This is based on the principle that the owner would have stood on the boundary facing toward his own land, dug the ditch on his own land, piled the spoil on his home side to form a bank, and planted a hedge on the bank. In other words, if the hedge belongs to you, then you also own the ditch on the other side of it, even if it appears to be on your neighbours land.

In the photo on the right, the ditch is presumed to be owned by the farmer who owns the left hand field on the other side of the hedge. The boundary is the yellow dotted line in the photo below it.

Can I Drain Sewage Treatment Plant Effluent Into The Ditch? 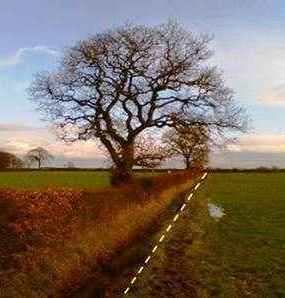 If you own the hedge, then it is presumed that you also own the ditch at the other side of it.

If this is the case, then you are currently allowed to discharge up to 5M³ of treated sewage effluent from a sewage treatment plant which has an EN12566-3 Certificate without having to obtain any permissions from the Environment Agency. It would also be up to your neighbour to legally prove, with actual evidence, that the ditch belonged to him in the case of any dispute.