The theory of Reed-Bed sewage treatment is simple, though in practise, the treatment is often far from satisfactory due to incorrect design by cheap, 'Cowboy' designers and infrequent maintenance of the system. 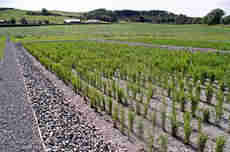 WTE Ltd. can design and install reed bed systems throughout the UK.

We have stopped our reed bed design work due to the very cold weather during recent winters and because one of our clients nearly died because of an infection caught whilst maintaining the bed. Many systems in the North East froze solid for weeks and the resulting pollution and problems, due to the complete lack of sanitation for the owners, has made us re-evaluate their suitability for the current Northern UK climate.

Our client had a pub/restaurant and contracted an infection from the sewage effluent via a reed- cut on his arm. He collapsed 2 hours later and was rushed to Intensive Care. The Specialist told him that if he had been delayed by only another 1/2 hour, he would have needed his arm amputating. This is too much risk for us to design any more reedbeds.

If you are determined to have a reed bed, then we suggest that you contact Oceans ESU who are, in our opinion, a reputable and professional reed bed system design company. You can also contact The Constructed Wetlands Association for details of their other members.

The Common Reed ( Phragmites Australis.) has the ability to transfer oxygen from its leaves, down through its stem and out via its root system in the gravel bed. This encourages micro-organisms that digest the pollutants in sewage to colonise the area.

The sewage effluent flows through this zone and is treated by the micro-organisms.

Early Reed Bed Sewage Treatment systems used the horizontal flow type of reed bed, where the liquid flows horizontally through the bed, though these had a lot of problems and have largely been replaced by other types.

There are three different types of systems that have been developed during the past 25 years for treating wastewater and sewage effluent.

Horizontal Flow systems only work when the effluent is of low strength.  They are not to be used to treat septic tank effluent, as this is too strong.

A typical application would be to treat the discharge from a slightly undersized package sewage treatment plant which is failing to meet its discharge permit standard for BOD and Suspended Solids.

Vertical flow systems are more efficient than horizontal flow reed-beds and can handle stronger strength effluent. They can reduce ammonia as well as BOD and SS levels. It is usual for there to be two reed-beds installed, one after the other down the slope of the site. Vertical flow ones can be used to treat septic tank effluent.

Multi-stage reed-bed systems, incorporating two stages of vertical flow. They work on a 'fill and drain' system, where one bed fills over 12 hours whilst the other one drains and vice versa. The idea is that as the effluent drains out of the gravel, air is pulled in and helps to form an aerobic bacterial colony on the gravel surface to digest the pollutants.

These systems invariably require the use of electric pumps, timers and control panels as the effluent is switched from one bed to the other every 12 hours.

Unless the site has a decent gradient, it is not usually possible to avoid the need for electrical power when designing a reed bed system. Even simple horizontal flow designs usually need control systems in order to ensure that surge flows don't swamp the system. In the case of Vertical flow and down-flow reed beds, a suitable electrical pumping system is required.

Reed beds are not a long term solution. They are a relatively new idea and even when they are designed and maintained properly, they will only be viable for up to a maximum of 7 to 10 years for reed beds that follow a full treatment plant as a final polishing filter only. Severn Trent Water, with over 300 installed, is currently having to start a refurbishment programme for reed beds which have been in use for a few years. According to Paul Griffin at Aston University, the refurbishment, which includes the removal and replacement of not only the reeds, but the entire gravel bed, is required every 7 to 10 years. He should know as Severn Trent funded research at Aston University into trying to find out why the reed beds clog. Reed beds that follow septic tanks have even more solids to deal with.

It is not a cheap operation to completely replace a bed and what do you do for sewage treatment whilst the refurbishment is taking place?

Maintenance and Replacement of the system

Reed bed systems are not low maintenance and a regular maintenance programme is required to keep them working properly. The reed beds that work are usually those whose owners love gardening, do not have a big enough garden to keep themselves occupied and are not worried by coming into contact with faecal bacteria, spiders, Grass Snakes (they love reedbeds), mice, rats and their associated diseases. The 'gardeners' will also require several injections every year against leptospirosis, Hepatitis, etc. so fear of needles is also a nuisance.

Reed-beds are not a cheap or easy option for sewage treatment. A typical price for a single house installation is between £3000 and £7000 and this does NOT include the septic tank, humus tank, pumping stations, balancing tanks or drainfield installation cost.

The septic tank installation is typically around £3000. Humus and balancing tanks are around £1500 installed. Pumping stations are around £1500 to £2000 installed. You are still left with the problem of where to discharge the cleaned water. This is preferably to a watercourse, but if there is not one available, then a soakaway drainfield is the only option. Expect to pay another £2000 to £4000 for this.

A complete sewage treatment plant system costs in the region of £2000 to £3000 and installation is typically around £2000 to £4000, depending on the site conditions.  Maintenance is usually only annual and carried out by someone else. Typical maintenance costs are £100/service.