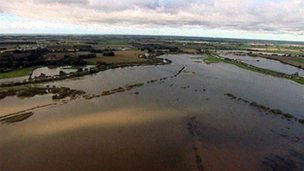 more frequent severe rainfall events the issue of pollution from sewage treatment plants and septic tanks is an ever increasing threat.

Excessive rainfall can overload soil’s natural ability to absorb water resulting in the ground becoming saturated.  Once saturation has been reached any further rain will result in surface flooding.  This problem is exasperated if streams and rivers become overload, burst their banks and flood.  These conditions will result in human sewage contaminating ground and flood waters and this can have serious consequences.

Many “experts” have designed sewage treatment plants/septic tanks with water tight lids to prevent sewage contaminating flood waters but such attempts are usually a waste of time.

A tank will flood in three ways:

1.       Through underground pipe joints, manhole riser rings and manhole covers up stream of the tank between it and the building.

3.       Via the outlet pipe which normally discharges to a drainage field or surface waters.

The most usual method of tank flooding is number 3.  This is because the excessive rain will first cause ground and surface waters to rise.  A tank will generally only flood via 1 and 2 once surface flooding occurs.

Human sewage is a very hazardous substance. Pathogens in sewage and wastewater can lead to many diseases such as:

Contamination of flood waters with human sewage can have dire consequences such as:

Pollution of watercourses and the impact on aquatic life.

The contamination of municipal water supplies most commonly through hosepipes and water supply pipe fittings.  If this occurs then a major risk is posed to the wider population who are not directly affected by the flooding itself.

The contamination of arable land.  For obvious reasons it is illegal for human sewage to contaminate land used for the production of food.

The contamination of livestock grazing.  Many pathogens can live for weeks (and in some cases months) in the environment and therefore pose a threat to livestock.

The effect of a sewage treatment plant flooding is not limited to contamination.  Nearly all sewage treatment plants have some form of motor which is responsible for driving the treatment process.  If this motor floods than it will need to be replaced once the flood waters recede.  At best this will cost a few hundred pounds and at worst over a thousand pounds for relatively small systems.

In many cases the problem has been caused by the construction of properties on unsuitable sites this is because planning authorities do not pay attention to Environment Agency guidance.

For other sites the problem occurs because of the failure of developers to undertake trial site assessment holes when investigating the suitability of drainage fields.

There is a very effective solution for greatly reducing the effect of excessive rainfall on a sewage treatment plant and to prevent the sewage contained within from causing harm.

Whenever there is a risk that a site might flood or the ground become waterlogged the sewage infrastructure should be installed as per the diagram below:

The foul drain from the building should lead directly to a raw sewage pump station.

This foul drain should have no manholes so as to eliminate risk.

The access into the pump station should be a watertight cover to limit water ingress.  It is also advisable to have it extended above ground level.

Pump stations only hold a nominal volume of sewage to if they flood the amount of sewage able to contaminate flood waters is only 10-15% of that in a septic tank or sewage treatment plant.  If it is known that a pump chamber will flood then it is very simple to flush this sewage into the sewage treatment plant and therefore remove all sewage from the chamber.

At this point it is likely that the building must be abandoned as the flooding will be severe.  The power to the pump station is therefore turned off so that it does not forward feed water into the sewage treatment plant.

The second stage in the system is a Vortex sewage treatment plant installed above ground.  This will ensure that the sewage and wastewater remains contained within the tank and does not mix with the flood water.

Vortex is the only sewage treatment plant able to be used because of the following features:

The majority of sewage treatment plants fail to meet all three of the above criteria because:

They are not strong enough to be installed without a surround.

Installation of the Vortex is simple because all it needs is a concrete slab to sit on.  It can be mounded round for aesthetic purposes but this is not essential.

The final part of the system is a drainage mound.

A drainage mound is a drainage field installed above existing ground level.

Saturated ground cannot absorb any additional water and hence many sites with drainage fields suffer during prolonged periods of rain because the sewage system backs up.  This is not acceptable for two reasons:

If required, a UV treatment system can be fitted to the outlet of the Vortex to reduce 99% of any remaining pathogens in the effluent.

Drainage mounds are very misunderstood and they require very careful design and construction. They are only suitable for sewage treatment plant effluent, not septic tank effluent, as the suspended solids content of the liquor is too high.  Most contractors will fail to correctly install a mound without guidance. Please contact our office on 01759 369915 if you require guidance on drainage mounds.