The cost of running the various domestic systems varies enormously. Click here for:

Sewage treatment explained - all the processes and what they do.

Cesspools and Cesspits offer no sewage treatment.  NO biological treatment occurs and the tank has no outlet.  They are simply huge sealed underground tanks where all the wastewater from a property is stored until it is emptied by a tanker.

The MINIMUM size allowed for a one bedroom house is 18,000 litres and for a 4 bedroomed house, the minimum size is 45,200 litres - massive..

Cesspools need emptying by a licensed waste disposal tanker contractor, and must have adequate capacity to store a minimum of 45 days sewage production. Approval to install a cesspool is required from the Local Authority under the Building Regulations. They will generally only allow one as a temporary measure, i.e. if mains drainage is planned for your village fairly soon.  They are NOT allowed in Scotland or France.

Cesspool systems must be regarded as a last resort as they are VERY expensive to run. The tanker charges for a family of four can be in excess of £9,000/year and it can be very difficult, if not impossible, to sell a house if it has cesspool drainage.
They are useful for Caravan Toilet Waste, but must then have a special coating on the inside, to prevent damage from chemical toilet chemicals. 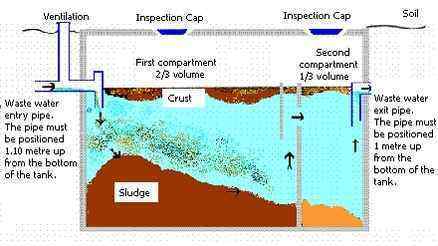 Septic Tanks settle the solids out of the sewage and the septic effluent discharges into a soakaway drainage field. It is illegal for septic wastewater to discharge into a ditch or other watercourse.

They were the traditional method of sewage disposal in rural areas, but they are no longer allowed for over 70% of UK sites.

A septic tank is only allowed for up to a maximum population of 15 people under the Environment Agency PPG4 rules.

Septic tanks are not allowed in Zone 1 of the Groundwater Source Protection Zones at all and even existing ones must be decommissioned.  .

Before you choose a septic tank as your method of sewage disposal, there are 3 mandatory tests that must be done to make sure that you are allowed to have one at all.

They operate by settling the solids out of the sewage and then discharging the septic water to a drainfield to soak away. They offer very limited biological sewage treatment and the effluent from a correctly sized tank still contains about 70% of the original polluting matter. This pollution is partially reduced by the soakaway drainfield system of land drains after the tank, which allows the ground to provide further treatment via soil bacteria before the pollution reaches the groundwater water table. This is vital, as groundwater is used for Public Drinking Water.
The septic wastewater will kill any soil fauna, worms, etc. in the vicinity of the Drainfield though, as. septic tank effluent is extremely polluting and strips oxygen out of the soil.
Details of how the ground may be used for this partial treatment of sewage are contained in BS 6297:2007.

These type of domestic sewage treatment systems comprise of a small electrically driven packaged plant, usually all contained in a single tank. 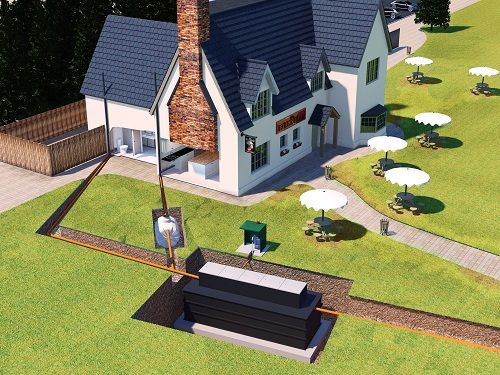 The sewage is first settled in a Primary Settlement Tank to remove the solids, which settle to the bottom and form a Sludge, which is removed , usually annually, by tanker.

The liquid part of the sewage passes into the digestion chamber, or 'Biozone', where air is introduced. The organic matter pollutants in this liquid are biologically digested by aerobic (oxygen breathing) bacteria which colonise a filter bed, or the surfaces of rotating discs.

The cleaned liquid then passes to a final settlement tank stage to remove the fine solids.

The treated wastewater effluent can be discharged to a Drainfield system, ditch or watercourse, (subject to Local Authority and Environment Agency C

nsents, if applicable). Traditional Soakaways are not allowd for sewage systems.

Maintenance, (which can be expensive, particularly for some package sewage treatment systems) and emptying of the plant to remove the settled solids, will be required at regular intervals. This is usually annually for a single dwelling domestic sewage treatment plant and 2 to 6 monthly for a multiple dwelling unit, as the settlement tank is comparatively smaller in larger, multiple house units.

The APEX three stage sewage treament plant is different, as it uses the settled solids in the first Primary Settlement Tank as a source of food for the bacteria in the Biozone. It uses an automatic process to trickle-feed the bacteria, even during holiday periods when no-one is using the sewage system.

For this reason, APEX sewage treatment plants cope very well with fluctuating flow rates and underloading, which is a problem with many residential sites, campsites at the beginning and end of the season and Pub trade during weekdays.

These sewage systems recycle their own waste products along with live, settled, beneficial  bacteria back to the digestion chamber to activate and speed up the digestion of the raw sewage.

They don't need any extra bacteria adding during their lifetime as they constantly 'top-up' the digestion chamber with active bacterial sludge from the final settlement chamber.

They are a simple, reliable wastewater treatment solution and tend to be cheaper than 3 stage plants, with a similar low electricity cost.

Only the Vortex ASP is adjustable, up or down, for different numbers of people using it.

These biological sewage treatment plants try to digest the gross solids and liquids together in the central compartment via air injection.

The sewage is aerated for a longer period of time than with a three stage plant, hence the name, 'extended aeration'.

There is no 'larder' as with an APEX three stage plant, so 'Feast and Famine' restricts their application for most plants. However, the Vortex activated sludge sewage treatment system, has overcome this problem by incorporating an air regulator valve to 'turn them down' for low populations and turn it into a 'smaller' plant.

The effluent can be discharged into a soakaway drainfield, or a watercourse, subject to the necessary consents

Servicing of these treatment plants is 6 monthly and the plants need emptying about every 1 to 2 years, (depending on how many persons are using them), to remove sludge.

The first extended aeration plants were brought into the UK from America in the mid 1990's. It was said at the time by the original importer, that they did not cope very well with underloading situations, but this information seems to be no longer passed on to the customer. al, apart from the Vortex, work better when reasonably loaded. 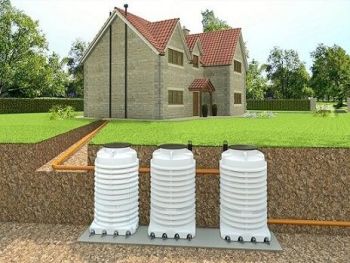 This sewage treatment system uses no electricity for the process and only needs an annual service.  They are the most sustainable plants in the UK.

The latest non-electric sewage treatment plant is the FilterPod. It is a unique UK design and uses inert RDX media for the filtration. This has the advantage of being non bio-degradable, unlike some of the others of this type.

The liquid is split from the solid waste in the pre-filter tank (or existing traditional septic tank if one is available) and filtered by the media in the second chamber. Bacteria grow in the media and digest the filtered pollutants.

The effluent quality is superb; far better than from most electric treatment plants.

Some of these systems have high running costs, however, as maintenance and servicing is expensive due to the high cost of replacement filter material. CHECK before you buy.

In our experience, you should only consider the Vertical flow reed beds when following a septic tank.   We have seen many cases where the effluent coming out of a horizontal flow reed bed, (designed by a firm of ‘expert reed bed designers’) following a septic tank was considerably WORSE than the effluent which went in!  As our local Environment Agency officer told me - a reed bed was his first successful pollution prosecution!  Click here for more information about reed bed sewage treatment

WTE can design and build all types of reed beds for both domestic and commercial wastewater.

We have stopped our reed bed design work due to the very cold weather in the past and the near death of a customer due to bacteria in his reed bed. Many reed beds froze solid for weeks and the resulting pollution and problems due to the complete lack of sanitation for the owners, has made us re-evaluate their suitability for the current UK climate.

The vertical flow beds nearly always need electric pumps which are expensive to run, although the system can be operated without power, if an adequate fall is available across the site.

Horizontal flow reeds beds can successfully follow sewage treatment units as a tertiary treatment but should never be considered as an answer to cleaning septic tank effluent.

Reed Beds are NOT a ‘fit and forget’ item and the wastewater treatment system requires a lot of maintenance, e.g. harvesting and composting the reeds in the Autumn, re-planting, weeding, etc. and annual emptying of the septic tank.  They can also smell and act as a breeding ground for flies and mosquitoes, so must not be situated close to dwellings.  Children and pets must be kept away from reed beds as they will be paddling in dangerous sewage effluent. All reed bed areas must be fenced. A Permit to Discharge is required from the Environment Agency.

Contact us for a correct sewage treatment system design for your site.