The Objectives of Sewage Treatment

Raw sewage is very polluting and all wastewater must be treated in order for it to be environmentally safe.

The three main parameters used to define sewage both as it arrives at a treatment plant (influent) and when it leaves a sewage treatment plant (effluent), are BOD, Suspended Solids and Ammoniacal Nitrogen. Sometimes, Phosphorous is also considered, particularly if the discharge is to a sensitive watercourse or lake, but this is not a usual requirement in the UK.

One of the main pollutants to consider is BOD, or Biochemical Oxygen Demand.

This measures the amount of oxygen, in Mg/L, required by microorganisms in the sewage to break down its organic matter content.  Sewage with a high BOD has high pollution potential if discharged into a water course because it causes severe depletion of the oxygen in the water. This kills fish and other aquatic animals which need this oxygen to breathe.

Normal domestic sewage generally has a BOD of between 250 and 400mg/l. This is much too high and sewage treatment must reduce it to a maximum of 20mg/L in the UK to minimise pollution potential. The Environment Agency may require sensitive sites to achieve even lower levels.

Suspended Solids (SS) are the tiny particles which float around in the sewage liquor and which do not settle out easily over time.  The normal UK discharge standard for SS is 30 mg/l.

A typical suspended solids concentration in normal domestic sewage is 300 mg/l. This must be reduced to a maximum of 30mg/L for discharge to a watercourse. As some BOD is associated with SS, a reduction in SS also leads to a consequent decrease in BOD.  An effluent with 30mg/l  SS looks like clear liquid but as the SS concentration rises, so the effluent becomes increasingly more cloudy.

Ammoniacal nitrogen is the nitrogen found in the ammonia (NH4) part of the sewage - mainly from urine. 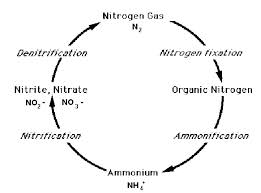 Nitrogen is a major plant nutrient and too much nitrogen in the effluent can, and does, cause explosive plant growth and algae blooms in watercourses, lakes and ponds. This is called 'Eutrophication' and results in the death of fish and other aquatic life due to oxygen starvation as the plants remove the oxygen from the water during the hours of darkness. The removal of nitrogen from sewage effluent has become a normal requirement for the treatment of sewage and other waste waters.

The removal of ammonia from sewage is done via a process called the 'Nitrogen Cycle'.

The nitrogen cycle first uses oxygen to change the NH4 to NO² (Nitrite). More oxygen then converts the NO²into NO³ (Nitrate). These processes are called
nitrification and most plants do this. However, Nitrate is still a valuable plant food which is not ideal for discharge to watercourses. The best sewage treatment plants then harmless the final stage of the Nitrogen Cycle, a process stage called Denitrification. During this stage the NO³ is converted to harmless Nitrogen gas which disperses into the atmosphere. As the air we breathe is made up of 78% Nitrogen anyway, this is environmentally harmless.