WTE can arrange full septic tank system inspections and surveys for house buyers prior to purchase.

We see sights exactly like the ones below almost every day during septic drainage surveys and site visits to failing sewage treatment systems and septic tanks.  All of the owners are in trouble.
See below the photographs you DON'T want to own!

This is typical of a sewage treatment plant that is undersized.  It is also typical of a plant that has not been serviced or de-sludged.  The multiple owners of this unit should be very concerned. 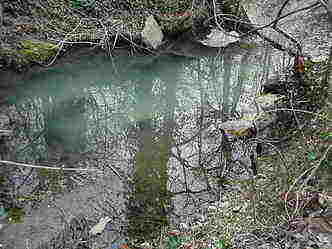 Or this, which is typical 'Bloom' pollution from a correctly operating Septic Tank made by one of the leading septic tank Manufacturers.  The installer piped it directly to the stream. Septic tanks must NEVER discharge into watercourses.  The owners of the one causing the bloom above should be seriously worried about a Prohibition Notice which would prevent them from discharging any water from the house.  Note the total absence of plant growth.  The stream is DEAD! 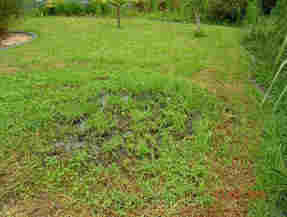 This is a failed soakaway in a garden. The installer tried to soak the effluent into a cheap soakaway drainage PIT instead of a properly designed herringbone system.  You can clearly see the outline of the drainage pit area in the grass. Children can no longer play in the garden and you wouldn't want to let your dog out in it either!   The garden will have to be completely ruined for a new soakaway system to be installed! 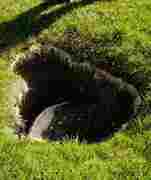 This hole appeared in a garden as a result of poor and insufficient backfilling when the septic tank was installed!  You can see the neck of the unit in the hole.  Concrete may be expensive, but not as expensive as this repair! 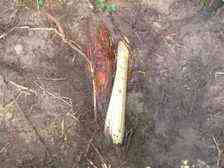 This drain has been laid much too close to trees which have flattened the pipe as the root grew.   The drainage pipe diameter is now too small to allow sewage solids to pass, or to rod the pipe.  The only solution is to either re-lay the drainage pipe to avoid the tree area, or to remove the trees, neither of which is a cheap option.  Did the Contractor not know that drainage pipes must NEVER be laid within tree root zones or was it the easiest option for him?

An overflowing manhole needs to be investigated.
The black mess next to the inspection chamber on the right is the mass of roots which were removed from the blocked drainage pipe.  If proper watertight sewer pipes, connections and manholes are used, as per Building Regulations, this cannot happen, but this type of drainage pipe is more expensive.  The owner has to either be prepared to rod the drains at regular intervals, remove the hedge or re-lay all the drainage.  Nice game! 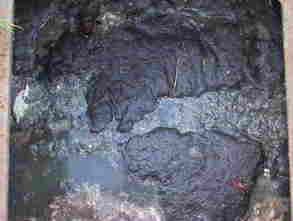 The above is a photo of a CORRECTLY operating Primary Settlement Tank in a 3 stage sewage treatment unit.  The UK's leading brands are these 3 stage types!  As you can imagine, Primary Settlement Tanks do NOT tend to be odourless unless vented correctly - which is not usual with UK systems!  This unit had been installed next to the purpose built barbecue area causing it to be unusable in Summer!

A fat blocked drainage pipe leading to sewage treatment unit  for a cafe.  The installer 'forgot' to install the grease trap!

This drainage installation is far too near to the house!!!  The excavation dangerously risks undermining the house foundations, as land can 'slump' at a 45 degree angle from the bottom of the hole!  If this happens here, the house wall will fall in!  It is also under the minimum distance allowed under UK Building regulations of 7 metres from a dwelling!  It proves that some Contractors either don't know or don't care!

This 'soakaway' drainage pipe above is only just buried under ground level!   The pipe is plastic 'flexicoil' type which is NOT allowed for soakaways.  In any case, Section H of the Building Regulations dictates that Thermoplastic pipes must be buried a MINIMUM 600mm. deep due to its lack of strength.
Normal drainage soakaway trenches are 600mm wide but this one is merely the diameter of the pipe!
The gravel is the wrong size - drainage stone should be 30mm to 50mm!  Someone PAID for this work! 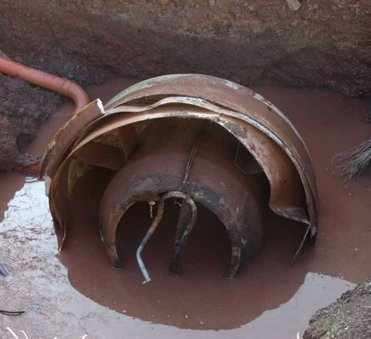 This extended aeration plant had been installed only 6 months before this photo was taken. The owner installed it himself following the manufacturers instructions that no concrete was required. One morning, after a rainy night, the owner woke to find the plant half out of the ground and the top half had sheared off completely. ALWAYS use concrete for a sewage treatment plant installation - most manufacturers have never installed a plant and know very little about groundworks! 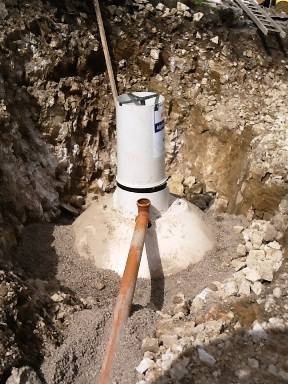 Above is a photo of a Klargester Alpha septic tank installation which is wrong. No concrete was used, just gravel base and backfill and the tank had a high chance of cracking when full. Luckily, we were called in early enough to stop the installers who had to remove the tank and start again. Why do they call themselves 'Professional installers'? If you want to find the installation manual, look in the bottom of the skip for the unopened envelope! 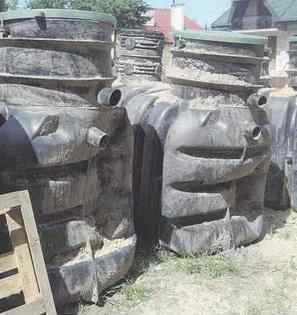 These are a popular make of low-profile septic tanks which were installed in high groundwater sites. They all had to be replaced as they distorted with the pressure. Buy the best quality tanks that you can afford - it is cheaper in the long run. 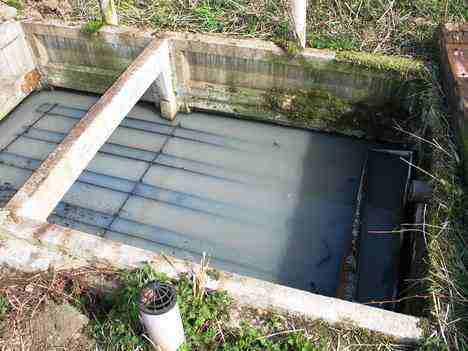 The above photo is of an old 'Thorpecrete' trickling filter sewage treatment plant. You can see the tipper tray submerged on the right and the distribution channels running from it are also under water. The plant has its outlet at the bottom, about 1.5 metres below ground, so there should be no liquid in the tank. The grey colour of the water is typical of the septic tank effluent that is discharged into it.The filter media, which is composed of stone chips, has become clogged and the soakaway drainfield is also blocked. A totally new system is required. Thanks to Mr.P. D. for permission to use the photo. 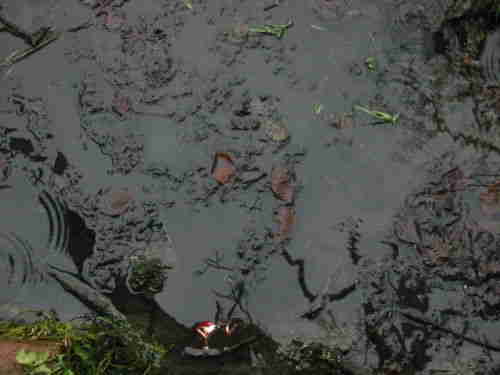 This is the effluent discharged into a ditch from an illegal 'In-Tank septic tank conversion unit. No wonder they are illegal! 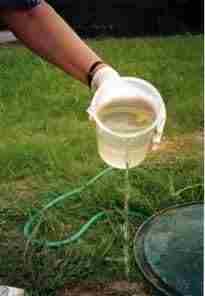 This is the photo that you want. A clean sample from a well designed, well installed and well maintained sewage treatment unit and drainage system.

Sometimes these effluent discharges are from older types of sewage systems that have fallen into disrepair, but often they are from modern sewage treatment systems and plants that are only a few years old!  Sometimes it is because the sewage system and drainage has been poorly designed or not maintained regularly, but quite often, it is the SAME brand of sewage unit with the SAME problem, or the SAME drainage contractors who make the same mistake over and over again!  90% of our drainage surveys reveal at least one installation mistake!!

Some of the most problematical sewage treatment units units we come into contact with are made by some of the most well known Manufacturers, some of which only have a 12 month warranty!  A household name does NOT guarantee a reliable, robust  product, a lot depends on the drainage and tank installation.

You only install a sewage treatment system once - do it RIGHT!!