If you are buying a house with a septic tank and a soakaway, then there are many problems that can arise after purchase.

It is often a soakaway that is the problem, either incorrectly designed or blocked, so it is wise to get a septic tank survey done before purchase.

First and most important - a septic tank soakaway is NOT a 'hole filled with stones or crates'! These soakaways are for ROOF WATER ONLY and are illegal for sewage effluent.

A septic tank soakaway is a DRAINFIELD of solid, perforated pies, laid in parallel trenches, on 300mm of washed drainage stone. See our Soakaway Drainfield page.

All septic tanks and their soakaways have problems sooner or later.

These problems often occur after periods of wet weather, with the septic tank overflowing, septic tank effluent appearing at ground level, seeping into ditches or backing-up the pipes. These are common septic tank problems.

How quickly the septic tank soakaway problem becomes a complete failure depends on several factors, which include how often the septic tank has been emptied, the nature of the soil, the height of the winter water table, heavy rain periods and the deterioration of the septic tank itself.

Under the Environment Agency General Binding Rules, BOREHOLE soakaways are not acceptable.  Soakaway CRATES and TUNNELS are also not allowed for septic tank or any sewage effluent, only for rainwater. BEWARE of adverts on the internet. They also refuse septic tanks that are installed in Groundwater Source Protection Zones. All septic tanks whose effluent finds its way into ditches or streams, either directly, or by mistake, have to be replaced with sewage treatment plants by 1 January 2020, or BEFORE this date, at the point of sale, if the property is sold. In our experience, this is the majority of septic tank systems!

The reasons for septic tank and soakaway drainfield failure

All septic tanks require emptying ONCE A YEAR. They only hold 12 months sludge storage and if sludge starts to empty into the soakaway soil, it very quickly blocks the air spaces (porosity) in the soil, the effluent cannot soak away, you suffer a soakaway failure and the septic tank fills up, backing up the system. Most Septic Tanks are very poorly maintained and I hate to think how many Clients have told me (when their system has failed!) that septic tanks never need emptying! I have STOOD on the solid mass inside, covered only by inches of liquid, on many occasions!

All septic tank soakaways must be constructed in the AEROBIC soil layer. This is soil which has oxygen in 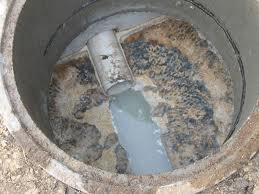 the air spaces between the particles and only occurs within the top metre of the soil.

This is because a foul water soakaway has two functions - the first is to soak the liquid away and the second is to treat the effluent and digest it via aerobic ( oxygen breathing ) soil bacteria.

Aerobic bacteria cause no problems for soil porosity.

Unfortunately, if the soakaway is deeper than one metre below ground level; and this includes the 300mm. gravel bed underneath the pipe, then it is in the ANAEROBIC soil layer and the bacterial growth is anaerobic.

Anaerobic bacteria cause huge problems as they produce a black slime which blocks the soakaway and the porosity of the soil.

The ridiculous fact is that most modern 'onion' shaped septic tanks have outlet levels deeper than one metre as standard! This almost certainly ensures that the soakaway is constructed in the anaerobic layer, making soakaway failure inevitable.

As Section H of the Building Regulations 1.39 states that ' Drainage fields should be designed and constructed to ensure constant aerobic contact between the liquid effluent and the subsoil' and the BS6297 2008 states that the maximum depth of the soakaway pipe is 700mm. why do leading manufacturers design septic tanks that do not comply? If you buy one of these, then reduce the height of the neck before installation to raise the outlet height.

It is even worse when 'Cowboy' installers do the work. We have had many incidents where septic tanks have been fitted back to front, making it impossible for the effluent to drain away, as the 'outlet' pipe is now higher than the 'inlet' pipe.

3. Nature of the soil and its effect on the soakaway performance

It is impossible to soak effluent away into a clay or clay-based soil in a normal soakaway drainfield. The porosity is so bad that soakaways often fail within the first 5 years as their air spaces become filled with the high levels of suspended solids, often above 1200mg/litre, in the effluent. (This level of suspended solids can also be found in badly maintained sewage treatment units, and the same thing applies - you ruin your own soakaway!) In any case, even with a sandy soil, the porosity is eventually destroyed by the high level of suspended solids and by the black slime that results during the decomposition, although it may take 15 to 25 years. The air spaces fill with solids and the soil turns from a 'sponge' into a 'brick'. Adding a pump to the system to try to force the effluent into the soakaway only makes matters worse. The solids are 'blasted' into the soils air spaces, blocking the porosity even quicker and hastening your soakaway drainfield's demise! Adding commercially available 'friendly bacteria' sachets is also useless once a soakaway failure has occurred. Because there is then no flow into the soakaway, they can do NOTHING to restore the soil's porosity.

4.  Winter water table and its effect on the septic tank soakaway

If the winter water table becomes higher than the septic tank outlet level, then the outlet pipe to the soakaway starts to drain water from the soakaway back into the septic tank. There is one thing that is certain: water ALWAYS finds its own level.  This usually causes the septic tank to fill and settlement chambers mix with clarified effluent with the result that, when the level subsides, the resulting effluent is full of solids which then block the soil porosity in the soakaway.  It is USELESS to try to jet out the outlet drain as all you are doing is forcing even more solids into the soil air spaces, making the situation worse. Always carry out a Trial Site Assessment Hole to determine the depth of the winter water table before you buy a building plot.

5.  Deterioration of the septic tank 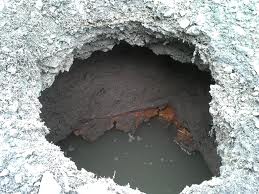 Many septic tanks' internal divisions/fins/rods and particularly the metal struts and bolts, (in the case of some 'Onion' septic tanks) and mortar joints (in the case of brick built ones), etc deteriorate, as raw sewage is a very corrosive environment. Concrete tanks are corroded by the hydrogen sulphide gas given off by the decomposing sewage. This turns into sulphuric acid on the lids and walls of the tank and disintegrates the concrete. The photo on the left is the hole made when a man stood on the lid and it collapsed under him. Note the crumbling nature of the concrete. NEVER stand on the lid.

When the septic tank is no longer able to clarify the sewage due to internal collapse, then the level of suspended solids in the final effluent rises dramatically and it is only a short time before soakaway failure occurs.

6.  Sodium Binding in the soil

Excess sodium (salt) in soils with fine particles of silt or clay causes Sodium Binding. This results in the clay particles binding together, resulting in a waterproof layer being formed around the soakaway trench. Sodium is in washing powder, detergents, sweat, dishwasher tablets, water softeners and water from vegetable cooking, etc.

Septic tanks and soakaways are designed to cope with a certain volume of liquid per day. You cannot increase this volume without increasing the size of the septic tank and soakaway to match.

8. Heavy Rain and its effect on the septic tank system

Periods of unusually heavy rain can also cause severe issues. If the soil cannot absorb the rainfall, it cannot cope with the extra liquid volume from a sewage system as well.

If you have bought a house that previously had only one or two people using the system and you are a family of four, this will have vastly increased the amount of water entering the soakaway. The previous owners may not have had any problems but that does not mean that you won't, as the soakaway may not be able to cope with the increased daily flow. This is an important point to bear in mind when buying a house with a septic tank treatment system.

How to solve the septic tank soakaway failure problem 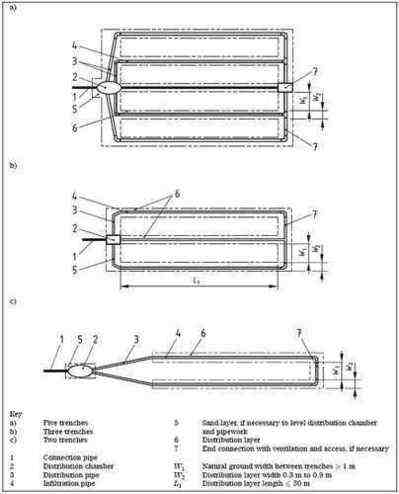